Earlier this year, IDC surveyed 301 IT users from medium-sized and large enterprises, asking them questions that allowed the research firm to determine the relative efficiency of those data centers. (For reference, the average data center contained 386 blades and servers, while the largest third of those surveyed averaged 711 blades and servers.)

If you’re an efficiency wonk, IDC’s findings are grim. When it comes to the routine tasks people repeat every day, typically on a manual basis, data centers are just 55 percent efficient. As for technology efficiency, which factors in overprovisioning to accommodate future workloads and redundancy plans, IDC says today’s data centers are only half as efficient as they could be, with a median efficiency rating of 50 percent. When it comes to the processes themselves – such as the steps required to provision a server – efficiency ranks at a dismal 30 percent.

The paper goes on to argue the benefits of a composable data center infrastructure – an argument that was ably presented here in a two-part blog by IDC’s Ashish Nadkarni, program director for IDC’s Worldwide Infrastructure Practice. (Be sure to read Nadkarni’s blogs, which make the case for the crucial role of software-defined resources, including Software-Defined Servers, in modern data centers.) Nadkarni also authored IDC’s report on quantifying data center efficiency.

The fundamental goal behind a composable data center infrastructure is to transform traditionally fixed resources into flexible assets that can be right-sized on the fly – quickly and easily – to fit any workload or data set. IT administrators already do this today with software-defined storage and network solutions.

But until now, servers have remained a fixed asset. Virtualization solutions have helped get more usability from a single server, but when unpredictable workloads and ever-larger data sets overwhelm existing servers, traditional virtualization platforms offer no help. What enterprises need is a way to marshal the servers they already have in house (or in the cloud) to create one or more virtual systems perfectly sized to handle that task.

At TidalScale, we have taken that concept and given it a name: the Software-Defined Server. With a Software-Defined Server, enterprises can combine multiple commodity systems into one or more right-sized servers. Users and applications see all the resources associated with those servers – memory, CPUs, storage and network – as belonging to one system. A simple point-and-click interface makes provisioning (and reprovisioning) fast and easy, with users able to configure and boot a new server in as little as a minute. No modifications to operating systems or applications are required. It just works.

Find out more by viewing the video below. And learn for yourself why some of the world’s most respected manufacturers, financial services firms and research universities are introducing flexibility to their data centers with TidalScale’s Software-Defined Servers. 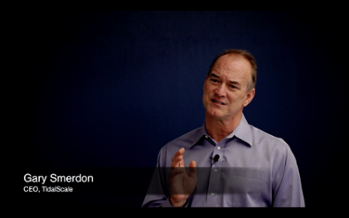